This guide will act as your whistle stop tour around the new MAST Dashboard.

Along the top of the screen is a navigation bar, which has 4 icons in the right-hand corner, as shown here: 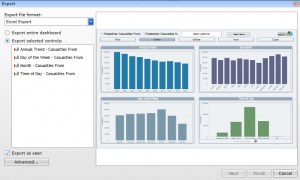 Print opens a new window allowing the user to print the current dashboard.

Clicking on the share icon provides links to the dashboard which can be shared with others. The links are for the Silverlight application, a HTML viewer version and the HTML explorer version.

On each page there are also a set of buttons and filters across the top:

The highlighted button is the currently selected page, in this case ‘When’. Clicking on another button will navigate to the corresponding page. The geographical area can be changed by clicking on the button labelled ‘Select Location(s)’ in the Silverlight version or ‘(All)’ in the HTML version. Geographies from ‘region’ down to ‘local authority district’ can be selected and it is possible to select multiple locations. It is also possible to filter the data by year using the button labelled ‘Select Year(s)’ in Silverlight or ‘All values’ in HTML. By default, all years (2004 to 2013) are selected. Selected locations and years will be retained when navigating to another page.
In the top left corner of the dashboard are two radio buttons labelled ‘Pedestrian Casualties From’ and ‘Pedestrian Casualties In’.

‘Pedestrian Casualties From’ shows resident casualties of the selected location(s).

‘Pedestrian Casualties In’ shows casualties injured on the roads of the selected location(s). 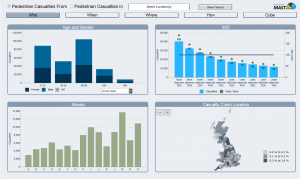 Selecting the ‘Pedestrian Casualties In’ radio button changes the layout of the dashboard. As IMD and Mosaic are not relevant for casualties involved in crashes in an area these charts have been removed and the other 2 charts expanded as shown below. The map now shows the home location of casualties injured in the selected location(s). The percentage is calculated from all known home locations. The selected filters for location, crash year and age group will remain when choosing ‘Pedestrian Casualties In’. 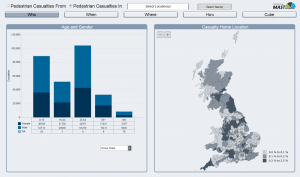 
The ‘when’ dashboard consists of 4 charts relating to the date the pedestrian was injured. There are charts showing pedestrian casualty numbers by year; month; day of the week; and hour. 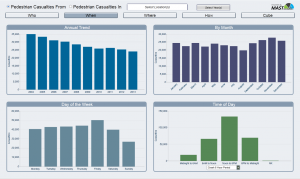 The ‘Time of Day’ chart has a drop down list underneath the x-axis. This allows the crash hour groupings to be changed from the default 6-hour periods to 3-hour periods or individual crash hour. Selecting ‘Pedestrian Casualties In’ shows the same four charts but with data relating to casualties injured in crashes in the filtered location(s).

This page focuses on the location of the pedestrian at the time of the crash. There are 3 visualisations here: Pedestrian Location; Pedestrian Movement; and Road Class. 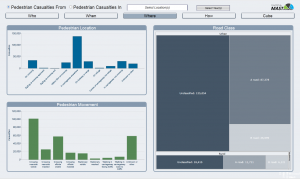 Pedestrian Location shows numbers of casualties by the location of the pedestrian, e.g. on a crossing, within 50m of a crossing and in carriageway, not crossing. Pedestrian Movement shows numbers of casualties by the STATS19 recorded movement of the pedestrian. Road Class is shown on a tree map. The larger the area and the darker the colour of the road class polygon the more pedestrian casualties were injured on that class of road. For example, the image below shows the tree map for Kent County. It is split in to ‘Urban’ and ‘Rural’ and both of these are further split in to unclassified road, A road and B road. Selecting ‘Pedestrian Casualties In’ shows the same visualisations but with data relating to casualties injured in crashes in the filtered location(s). 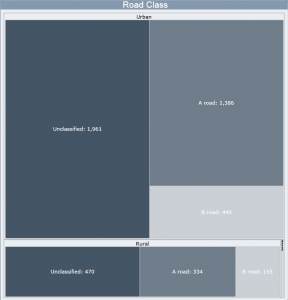 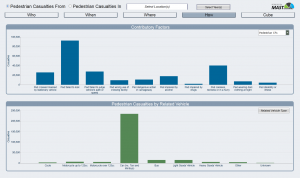 Unfortunately, cube data isn’t currently available in the HTML version and is only accessible in Silverlight.
The four pages detailed above show some of the most common analysis relating to pedestrian casualties. However, if you require more detailed analysis using a range of dimensions, the cube contains cubed data similar to MAST. For those familiar with MAST the cube will be fairly self-explanatory although there are some differences. On navigating to the cube a blank report is shown, as seen in the image below.

There are a series of dimensions on the left hand side of the page. These dimensions can be dragged on to the report. When dragging dimensions drag them on to the title of the box i.e. ‘Categorical (Dimension Rows)’.

There are 2 tabs just above the rows box, where either the data grid view or the chart view can be selected. 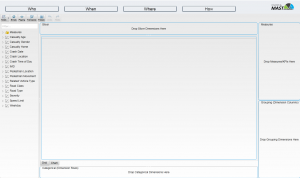 Below is an example of how to use the cube. We are going to use the dimensions in the list on the left to show child pedestrian KSI casualties in Aberdeen, by year, over the past 5 year period.
As all the casualties in this cube are pedestrian casualties we don’t need to filter be casualty class here. Firstly, we drag the dimension ‘Crash Date’ to the rows box. To filter the crash year we can either right-click on the dimension in the rows box or click on the small icon to the right of the dimension and click on ‘Edit’. Deselect all years using the icon second left at the top and select only the years 2009, 2010, 2011, 2012 and 2013. 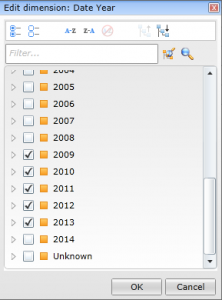 We then drag the ‘Severity’ dimension to the columns box and ‘Crash Location’ to the slicer box. Right-click on the ‘Crash Location’ dimension, click edit, de-select all locations, select ‘U_Aberdeen’ by drilling down in to Scotland, R_Scotland, P_Grampian, G_ScotAber and checking the box next to ‘U_Aberdeen’. This produces the following table. Totals can be toggled on and off using the ‘Totals’ icon to the top left. 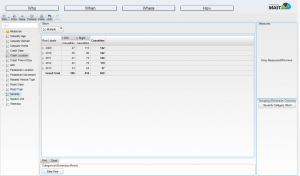 Clicking on the chart tab above the rows box shows the same data but as a chart. 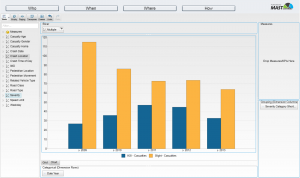 To the top left of the page are seven icons:

The Totals icon allows the totals in the grid to be toggled on and off. By clicking on the down arrow on the right of the icon you can chose whether the totals are shown for the rows and/or columns axis.
By default only hierarchy members that have at least one value are shown in the grid. Clicking on the Empty icon shows all of the hierarchy members regardless of whether there are any related casualties.
The Paging icon changes the number of rows and/or columns that will be shown on each page. If there are more records than the number(s) entered a control will be visible to the bottom of the screen to move to the next page(s).
Transpose swaps over the row and column axes.
The Freeze icon freezes the grid/chart and will not change until the icon is unselected.
The Undo icon undoes any action in the cube and the ‘redo’ action redoes the action.